Electroplankton = best new reason to get a DS 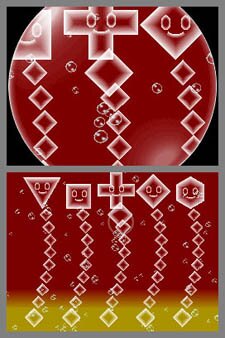 The guys, gals and (we have to assume) benign robots over at Gearlog have already a posted a short and sweet article about the charms of Electroplankton, Nintendo's wonderfully weird musical toy that's due for release early next month. The author, Carol Mangis, is spot-on when she notes that Electroplankton isn't really a game in the traditional sense, but a rather unique exercise in music manipulation. She may also be correct in calling it the best new reason to buy a DS. She may also be a man. A man named Carol. There are plenty of options to consider here.

Of course, we're mostly interested in the game because it'll let us lord over perennially happy little creatures, coaxing them into submission with an iron stylus. That's not quite the inspiration that lead to the creation of the game, however, as a letter from the game's creator printed in the manual is keen to point out. "At different times in his life, he variously used and loved a microscope, a tape recorder, a synthesizer, and a Nintendo NES. These devices were the combined elements that sparked the idea."

Well, that settles it. I'm off to play around with a toaster, a clarinet, an egg whisk, a baby seal and my DS in the hopes of coming up with an amazing new concept.