The dish on parenting ... check out the new ParentDish!
Add to: My AOL, MyYahoo, Google, Bloglines

Want rumble? Do it yourself

If you're lacking the small amount of cash it would cost you to pick up a Rumble Pak of your own, there's always the DIY solution. With just a little elbow grease, a spare Pokemon Pinball GBA game, and a spare Nokia 5100, you can create your own Rumble Pak that fits in flush with your DS Lite. Of course, one could argue that it isn't worth the effort and suggest just plunking down the dough for one, but then you wouldn't have that sense of accomplishment that comes from doing it yourself and the future comfort of bragging to your friends that you're better than them.

The Nintendo DS Rumble Pak didn't show up on most people's radar back when it was first released with Metroid Prime Pinball a year and a half ago, but with over a dozen titles now using the force feedback cartridge, more and more people are looking to buy one for their compatible games. DS Lite owners, however, will be annoyed to hear that the only Rumble Paks sitting on North American shelves are the original, GBA-sized carts.

Though they've been available in Japan since last May, Nintendo hasn't yet brought the smaller DS Lite Rumble Paks to the states. If you're looking to purchase a cartridge that won't stick out of the GBA slot, buying Nintendo's DS Lite Rumble Pak would set you back about $24 (plus international s/h) at an import site.

eWin, a company known for manufacturing high-quality carts for the homebrew market, has produced a third-party alternative that puts the official Rumble Pak to shame. Available online for approximately $10, this new DS Lite Rumble Pak already has the advantage with its bargain price. Being cheap doesn't necessarily mean it's a second-rate product. According to GBAtemp's review, eWin's force feedback was more enjoyable than the "buzzing" from Nintendo's cart, and noticeably quieter too.

Unlike with Nintendo's product, you can match eWin's Rumble Paks with your own DS Lite, choosing from white, black or pink carts.

Starfox Command looks to shake it up 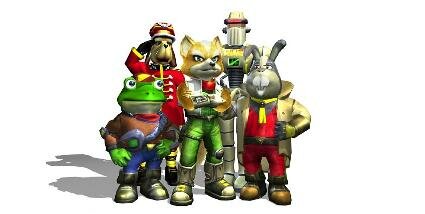 With the news of 30 stages to traverse in the upcoming Starfox Command, the added news that the game will feature full support for the DS rumble pack, which a few of you might've been able to acquire on the cheap, is like a sweetest cherry on top of our sundae. Also, the game will see the return of mainstay characters in the franchise actually getting into their respective cockpits and taking to the skies alongside Fox across the various game areas. Multiplayer, both locally and through Wi-Fi, also looks to be a very good place to spend some time. If you're one of the folk that purchased Metroid Prime Pinball, you've no doubt been playing Metroid Prime Hunters all this time with your free Rumble Pak as it realistically vibrated the echo of missile damage through the handheld, then your fingertips, and finally on into your brain. You could've also purchased the GBA slot-fitting add-on direct from Nintendo, or at a more expensive price, through importer Lik-Sang, to experience the tremors of gameplay. Or, if you're one of the dozens of people on the globe who've yet to acquire Metroid Prime Hunters, you could finally pick up the bounty-hunting simulation and get the accessory for free as it's now included in copies of the game, yet only while supplies last. No word yet on if the bundle will be available for those in Europe.

When we opened our mailbox today, one of our wonderful readers laid a nice little tip inside that told us to let you know that the DS Rumble Pak is available for your importing pleasure and is compatible with games such as Metroid Prime Hunters and Mario and Luigi: Partners in Time. The cart slides into the GBA port on your DS, Lite or Phat, and has a price tag of $24.95 US. The tip also stated that if we didn't cooperate, there would be consequences.

[Update: a more thrifty reader by the name of Cosmos comments that it may be obtained direct from Nintendo for $9.95 US.]