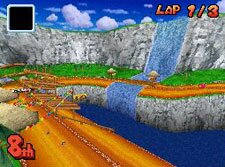 In addition to the online track hacks and other unlockables for Mario Kart DS that we've previously reported on, you can know uncover beta courses that were never released by Nintendo. A forum member writes: "There are several courses in Mario Kart DS that are unfinished and completely unavailable (beta). They can be played with a little bit of hacking, but not at all perfectly. The textures are missing, so the courses are displayed almost pure white."

Could lack of time be the reason for not including these tracks? Only Nintendo has the real answer, but it would have been nice to get some extra tracks on the game. Maybe some future solution will allow DS owners to do so though.

[Thanks, Sean; via Nintendo Forums]

Would it suprise anyone if they released a GBA cartrage expansion pack for even more tracks to race on, the way a "Band Brothers" expansion pack was release in Japan to add more songs to the title?

It never occurred to me that the GBA slot could be used for expansions.