When we last fixed our gaze on Cheap Ass Gamer's list of DS discounts at Amazon, we were presented with eight marked-down titles -- two of which were worth your money, the rest being of middling quality. Since then, the thrifty tally has expanded three-fold, its ratio of rad-to-bad offerings also steadily increasing. Here are a few highlights from the 29 27-strong bargain lineup:

$2.99
$10.99
$14.99 As you probably already know by now, Amazon waives its shipping fees on orders totaling over $25. We can't predict how long some of these deals will last before going out of stock or returning to their original price, so now is not the time to be indecisive! Break your piggy banks open and run past the post break for the full list of games on sale.

We were poring over the new Silent Hill 5 "details" today (more like vague statements from Akira Yamaoka about how awesome it's going to be) and all we really know about it is that it's going to be more like Silent Hill 2 (yay) and it's coming to some consoles that aren't the DS (boo). Our first reaction is to be outraged. We love our system and we love Silent Hill and its atmospheric, psychological horror storytelling.

But would we actually love them together? The larger question here extends beyond the boundaries of one foggy town: is the DS an appropriate format for survival horror? We had one outing already in Resident Evil: Deadly Silence, which a very trustworthy source tells us wasn't an entirely successful experiment.

Alternately, if the major discussion topic doesn't interest you, we can just talk about Silent Hill and how great it is.

Rumor is that director Paul W.S. Anderson (of Resident Evil and AVP) is off the Castlevania film slated for 2009. There's no word yet on who might take over in his place. We can only guess what horrors the studio might have in store for us next. We're not too fussed; this blogger, at least, was way more interested in this other project anyway. Movie adaptations of video games are just risky and almost never work out as well as we could hope. Is it too much to dream that perhaps the Castlevania movie will just disappear? Just spend that money on making more games!

For all the innovation that's present on the platform, it's somewhat unusual to find DS owners getting so fervent about the remake of a 10 year old game that's already been remade once before. Then again, the game in question just so happens to be Resident Evil: Deadly Silence, a title crammed to the brim with, silly plot developments, Jill sandwiches, puzzle-solving amulets and, most importantly, grotesque zombies. What's not to like, right?

1up has posted a nice little preview of Capcom's portable evil, confirming some of the things we were wondering about and detailing some of the differences between the DS version and the original. With a touch-controlled menu, first-person slashing sequences, cooperative wireless play and the ability to literally blow poison back into an attacker's face, it seems like the game makes pretty good use of the DS' abilities. After all, it could have been very easy for Capcom to just slap a map on the top screen, call it a day and watch the franchise rake in the cash.

Now if only we could get a version of Resident Evil 4... 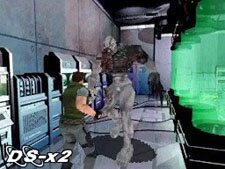 After watching the video trailer of Capcom's re-REmake of Resident Evil earlier this month, it  became apparent that Capcom was making every effort to appease survival-horror fans...well, at least the ones that enjoyed the series before Resident Evil 4 fixed revitalized it. Yes, the static camera angles, obtuse "place the magical obsidian gem into the fish statue" puzzles and robotic aiming have all returned, but the allure of slashing zombies in first-person view and an apparent multiplayer mode will undoubtedly prove much too hard to resist.

Still, it would have been far better to see the game drop the fixed camera angles and adopt an over-the-shoulder view with precise, stylus-driven aiming. The environments are all real-time now, so why not? Why can't you use the guns in first-person mode? And how about a Nintendogs-esque mini-game where you attempt to train a chained zombie, only to have him nibble your arm off at unexpected intervals? Ponder these questions while you absorb the new and very bloody screenshots of the game.

[Correction: Upon closer scrutiny (thanks el pero de nate), it seems we gave this remake a bit too much credit. The environments aren't real-time, but we still stand by our ideas for making the game better.]