Gadling is giving away free tickets to Amsterdam!
GameDaily
Add to: My AOL, MyYahoo, Google, Bloglines

DS Daily: Testing it out

One of the less-discussed features of the DS is the downloadable demo -- probably because a lot of people just don't use it! Whether it's a matter of not being near a download station, or having a download station in an inconvenient location, most gamers we know who own a DS have never, or rarely, downloaded a demo to their handheld. Have you? If so, how often?

In a perfect world, we could download our demos from anywhere (say, the wide world of the internets) and test nearly any game. Can you tell we're waiting (im)patiently? Over the past few months, which games do you think would have benefited most from a downloadable demo? With so many games to choose from, a few titles often get passed over, after all, because you just don't get to try them.

From late next week, every DS owner in Japan will have totally free access to the first of four student-developed titles. That's because the games in question were originally created under the watchful eye of Nintendo, which is now releasing these at DS Download Stations around Japan. Each game will be available for a fortnight, before sadly disappearing into the ether for ... well, ever.

What's really striking about these is their apparent quality -- if you had told us the above shot was taken from a game developed at a professional studio, we'd have totally believed you (in actual fact, it's from Wakerai no Heya Tsuzuki, a touchscreen horror game)! Equally intriguing is Nan de Momo Koko Yasan, which equips players with a "magical paintbrush" with which to color objects. The other titles are Kiki Master and Watashi no Otochabako.

It's almost a certainty that we'll never play these ourselves, but we'd love to see a similar initiative happening over here. Tap the youthful minds of the U.S., Nintendo!

With Majesco's environmentally aware RTS, Eco-Creatures, scheduled for the next DS Download Station update, we're reminded of how great it is that we can actually try out some handheld games now before buying them. And it's not all Nintendo-developed titles, either -- third-party manufacturers are putting out demos for quality titles, too.

So, have you taken advantage of Nintendo's DS kiosks yet? Or are you waiting for Nintendo to finally bring Everybody's Nintendo Channel to North American Wiis so you can download demos without ever leaving home?

Kiosk Hunting: Here and there, but mostly there 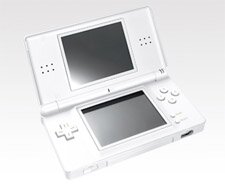 When you ask DS Fanboy readers to do something for you, they don't waste much time. This is a valuable lesson I've now learned after putting out a call to you guys to let us know where and when you stumble across one of the many Wi-Fi tendrils of Nintendo's download station network currently spreading across the world. My online persona was buried beneath an avalanche of tips, comments and the usual death threats, but it has now surfaced and is ready to start compiling the information in an epic list that's sure to inspire a major motion picture. This is just the second part of our ongoing quest and I hope to keep adding new locations on a weekly basis.

A big, slightly overzealous "thank you" to everyone that contributed to this round. If you don't see your highlighted area in the list, be sure to check back later in the month. A few brave souls have also added some new locations to the Frappr map--quite a feat given that working with that application is about as pleasant as a sturdy kick in the head. The format of this list is probably far from optimal, so please let me know how you'd like me to change it in the future.

Also, the information from readers isn't always exact, but if you see that one Best Buy (or another store) has a download station in your region, chances are decent that others will have too. You'll know you're close to one by either recognizing a small banner and a DS set in wireless mode behind some plastic or experiencing a lightheaded sensation as Wi-Fi beams scramble your brains.

Keep the details (we want street names!), pictures and experiences coming! The full list is but a click away.

Continue reading Kiosk Hunting: Here and there, but mostly there

One of our UK-based readers sent us one of the first bits of information to help in our ceaseless quest to locate all the DS download kiosks in the world ever.

"I found a DS demo kiosk in HMV on Oxford Street in London.  It was demoing Mario Kart DS and had a crappy times new roman a4 print-out that gave instructions on how to download demos from the kiosk.  I followed em and sod all happened.

I went back 2 days later, and they changed the kiosk to an Animal Crossing demo with a new shiny sign that said you can download demos.  I tried again and it worked.  All they had was Polarium, so I grabbed that and finished the demo on the train ride home..."

And our progress on the American front? Not so good. Nintendo seems to have hit a delay in rolling out their kiosks, with the Nintendo Store in New York being the only US location thus far to be bathed in Wi-Fi goodness. Nintendo's own Download Station page promises that the units will start showing up in early April, however, so be sure to keep your eyes peeled and your DS powered on.

If you spot one, let us know what your experience with it was like! Tell us what games you tried! Send us a picture! Or update this Frappr map that one of our swell readers created! And make obnoxious use of exclamation marks!

[Thanks Butch, Sean and D. Short!]

[Update: Thanks for the submissions so far! Just make sure you give us enough details on the location--states are rather large, after all.]

With March in full swing, it's finally time for Nintendo to begin placing mysterious, oblong structures in various game stores spread across the North American continent. Emitting undetectable Wi-Fi beams, these innocuous-looking kiosks promote a very subtle form of mind control, implanting the desire to move closer, switch on your DS and download trial versions of "fun" upcoming games. There's no telling how many hours and relationships may be lost to this devious scheme.

In the interest of public safety, we must locate each and every one of these so-called download stations (Japanese version pictured to the right). It is with this goal in mind that we call on you, our astute readers, to help us track these monstrous devices down and warn other readers of the potential dangers that lurk within their nearest shopping complex. The task is simple: If you spot a DS download station in your area, send us the location or, even better, a picture of the beast as it whirs discreetly in the used games section. Please make use of our tips form to submit the information.

Once the sightings start rolling in, we'll post a weekly update (more frequently if required) informing you of the latest discoveries and their locations. Keep an eye out and above all, be careful out there. We can't afford to lose more souls to that Tetris DS demo.

Upon hearing that the NYC Nintendo Store had begun hosting a DS Download Station, Gaming Steve rushed to the scene with a phat DS in hand and some Brain Training in mind. After failing to find the actual station, a shocking truth was revealed: The Wi-Fi signals are coming from inside the store.

The omnipresent power of Wi-Fi flooding the building quickly enabled him to latch onto the download service and grab some demos. Download time is reported to be very quick indeed, though 15 seconds may seem like an eternity when you're waiting to play Tetris DS. The linked article also contains some impressions of the various demos and you'd do well to check them out if Nintendo still hasn't gotten around to dropping of a Wi-Fi kiosk thing at your local mall.