Gadling is giving away free tickets to Amsterdam!
GameDaily
Add to: My AOL, MyYahoo, Google, Bloglines

Oddly enough, Midway's Mechanic Master won't be the only Incredible Machine knockoff coming to the American DS. I Love Geeks is a localized version of Clever DS, the Rube Goldberg-building game based on the German TV show of the same name. The American version, published by CDV, will have a new story from ... Marc Ecko and his team? When we think "geek," we definitely think of hip-hop-influenced fashion designer Marc Ecko.

Geeks has some storyline about assisting four scientists to solve puzzles while also dealing with high school bullies or something, but basically it's 100 puzzles requiring machines built out of specific parts to solve various simple problems. Awesome!

Tangram-like puzzle coming to DS to embarrass us

We have a problem with certain kinds of puzzles-- slide puzzles, for example, are damn near impossible for us, and we're quite smart otherwise (really!) It's just some weird mental block that prevents us from rearranging pieces to form a shape. Put us in front of Tetris and we'll drop Alexey Pajitnov's ruggedly bearded jaw, but slide puzzles confound us every time.

The same is true of tangrams. We like making abstract shapes out of them as if they were a building set, but we're useless when it comes to matching shapes. So, naturally, we're really excited about Hamekomi Lucky Puzzle DS, which is a series of tangram-like dissection puzzles in which players put together shapes like the Speed Skater and the Cossack Dance (seen here.)

We go nuts over puzzle games that put our near-limitless lexicon to good use, so we take every opportunity to highlight releases like Bob Fossil's Word Wrap. His homebrew project digitizes the word hunt games found in daily newspapers where you have to form as many words as possible with a restricted set of letters. The end result is not only fun, but it manages to improve on the traditional pencil/paper experience.

You spell out your text by tapping the characters on the touchscreen, sending them to the top screen's list of completed words. Jumbling the letters to get a new perspective of your selection has also been simplified with a "wrap" button. Call us lazy if you want, but this setup beats the pants out of having to write everything out by hand!

There are two Time Attack styles where you can work against the clock by either finding the longest word or collecting a specified amount of words. There's also an Endless option where you can sift through the shuffled letters at your own pace. Each mode comes with three difficulty levels, but being the word geniuses we are, it's "go hard or go home" for us.

For those of us hoping to clutch onto a DS and listen to the sage advice of Brain Age's Dr. Floaty Head (his real name's so hard to remember these days) in order to lessen the rate of our inevitable mental decline, a recent article in the Wall Street Journal's science journal is sure to come as bad news. According to a recent study, constant mental exercise does nothing to slow down the rate of cognitive decline.

Timothy Salthouse of the University of Virginia notes that "there is no convincing empirical evidence that mental activity slows the rate of cognitive decline," a message that stands somewhat opposed to Nintendo's Brain Age campaign. "The research I reviewed is just not consistent with the idea that engaging in mentally stimulating activities as you age prevents or slows cognitive decline." While the rate of mental erosion is labeled as constant by the study, it suggests that the minds that remain sharp are merely dropping from a higher point. The higher you start, the longer it takes you to hit bottom.

The mental usefulness of the innocent crossword puzzle also comes under attack assault fire, with Salthouse concluding that there is no evidence that habitual puzzle players experience "a slower rate of age-related decline in reasoning." What's a five-letter word for bummer?

Still, the article points out (perhaps obviously so) that the greatest benefit of games like Brain Age is that the constant training improves an adult's ability to perform the given task well. One thing's for sure--we'll soon be glorified experts at saying "Blue!"

Some Doctor: Brain Age is good, but don't get fat

According to an article over at Gamasutra, Nintendo is adding some more marketing push to Brain Age: Train your Brain in Minutes a Day in the form of Dr. Elizabeth Zelinski, dean and executive director of Leonard Davis School of Gerontology at the University of Southern California. Her smarty-pants opinion on Brain Age:

"Nintendo's Brain Age should be just one element of an active lifestyle that includes mental stimulation, exercise and a good diet. Brain Age is a great way for people to keep challenging themselves."

Nintendo sends word regarding a matter of gray importance: Sudoku. Not to be confused with the murderous little Japanese girl that crawls out of the television on a weekly basis (that would be Sadako), the puzzle game has addicted many with its gentle massaging of that most intelligent and squishy of organs, the brain. With 400 different puzzles (all selected by the original creators of Sudoku), however, Sudoku Gridmaster is likely to be less of a massage and more of a brutal mashing.

Not content with sticking some Sudoku puzzles in the upcoming Brain Age, Nintendo is releasing a stand-alone title featuring four difficulty settings and input via the touch screen. If you're keen on subjecting your brain to that sort of thing, make a mental note of Sudoku Gridmaster's June 26 release date.

If you've never heard of the Simple series of DS games, allow me to bring you up to speed: They're simple games. Well, that was easy. Now that we're on the same page, we can note that two new titles in the successful franchise are headed towards Japan. The first one to hit is Simple DS Series Vol. 7: The Illust Puzzle & Suuji Puzzle. Oddly enough, the game that follows is Vol. 5: The Trump.

Though the IGN article provides no simple explanation as to why the volumes are being released in a strange order (it's possible that they just got the numbers wrong), it does mention some of the gameplay you can safely expect. The Illust & Suuji Puzzle is a variant of, you guessed it, Sudoku. There's just no escaping the onslaught of Sudoku, it seems. In fact, we may have to start calling it a "phenomenon", an unpleasant turn of events considering that we struggle on a daily basis to correctly spell big 'ole words like that.

The Trump, on the other hand, capitalizes on a different kind of phoneme entirely--card games! It's set to feature 17 different kinds of card-based activities, which should be more than enough to addict those with a fondness for aces and spades. Best of all, both Simple games will incorporate multiplayer support for up to 4 players. Won't someone please pick these up and release them in the West? At the right prices, we're sure they'd turn out to be quite a pheromone.

America: Nintendo will make you smarter 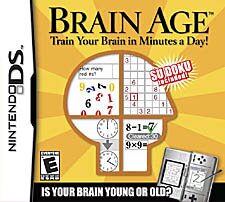 Nintendo have officially announced that the Brain Training series is coming to the North American DS under the wordy moniker, Brain Age: Train Your Brain in Minutes a Day. Though it doesn't specify exactly how many minutes a day, we feel that it's probably safe to assume that if you own a DS, you can't possibly be that dumb. As for Gizmondo owners, well...

Ah, but we jest! We know that everyone enjoys a bit of mental gymnastics, be it word conundrums or tricky mathematical enigmas. Brain Age looks to provide just that via an easy interface and the guiding hand of Japanese mad neuroscientist, Professor Ryuta Kawashima (his work inspired the game). Our dear friend, The Reggie, also chimes in to point out that Brain Age is like a trip to the gym for that squishy thing inside your skull.

"Our brain-training series, led by Brain Age, builds on the popularity of word and number puzzles and acts as a treadmill for the mind."

Brain Age hits on 17 April and is followed shortly by Big Brain Academy, which releases on 30 May. The latter title is the second one in the Brain Training series, offering some more cerebral challenges and even multiplayer capability. The Brain Training games have already sold more than a million copies each in Japan and we expect it to do just as well on this side of the pond. We'd be stupid not to buy it.

[Via Joystiq, thanks to everyone who sent this in!]