DS Daily: The fooling comes to an end

With yesterday being April Fools' Day, the internet was set ablaze with crazy rumors and fake news. DS Fanboy was even on hand with its own little something something to mark the occasion. Aside from telling you our most darkest fears, we broke news involving a certain Nintendo president and his theft (or, as he puts it, "discovery") of a rather large bag filled with popping corn.

Aside from that, we did manage to round up some of the best pranks the internet pulled yesterday, chronicling them all for your amusement. Who's joke was best? Personally, we couldn't stop playing that Space Invaders game over at Yahoo Japan, but that was just us.

What did you enjoy most on yesterday?

Oh man, is that Nintendo of America president Reggie Fils-Aime over there, bringing you a giant bag of popcorn? It must be your lucky day!

Too bad it's April Fools' Day! You're not getting any popcorn at all! Nope, it's just another bag of the usual stuff -- disappointment, regret, and the simple pain of living.

Rather than spend your day weeping over missed opportunities and movie snacks, why not peruse our collection of April Fools' Day DS pranks? We've gathered up all of this year's handheld shenanigans we could find around the internet, providing you a concentrated punch of lulz to counteract Reggie's kick to your head.

When Reggie sat down with the NY Times recently, many might have misinterpreted what Reggie said in regards to future plans regarding DS downloads and the Everyone's Nintendo Channel. Gamasutra states that a nameless Nintendo representative issued a statement regarding the rumor of downloads directly to the DS as "incorrect."

An anonymous Nintendo representative apparently said that the real functionality will reside in the Wii being able to download DS titles to be played on Wii. "Users can download games to play on Wii," the nameless NIntendo rep said. This rep also supposedly went on to say "and, in the future, the Nintendo DS will be able to receive demo versions of some DS games from Wii, but not the entire game. The demo will be erased once the Nintendo DS is turned off."

We're wondering at the possible alterations our DS games would need to go through in order to be played on Wii. How about you?

Finally, we get some kind of information regarding downloads for our DS from the Wii. Reggie took part in an interview recently with the NY Times to discuss the success of the Wii and DS. Both are doing well, but thankfully this piece focuses more on the DS.

Reggie first goes into Wii to DS downloads, which will come via the Everyone's Nintendo Channel. Reggie doesn't go into exactly when we'll be able to mess around with the new Channel, so sadly we're still a bit in the dark. Light at the end of the tunnel comes in the form of downloadable puzzles in Professor Layton. With the game coming in February, we're assuming it'll arrive sometime around then.

When thinking back to that moment when Reggie pulled the GBA Micro out of his pocket at E3, the only feeling that could come close to what we were feeling then is if we were repeatedly punched in the crotch. And while some find the Micro to be a wonderful little gadget, we think those folks are crazy. Looney Tunes crazy.

Numbers don't lie, however, as even with 2.5 million units sold, it's still one of the top ten worst-selling handhelds. It probably has something to do with the fact that squinting at its tiny screen for mere minutes causes incredible headaches in the player (based on our own experience).

It's the final countdown! Need the quick skinny on catching all of Nintendo's megatons, minitons, and Reggietons at this afternoon's E3 press conference? We've collected it all -- starting times, links to FREE and LIVE video streams, and even Morrissey -- right here!

Songs that will get you pumped up:
If you're stuck at work, unable to watch any of the video streams, don't forget that our big brother, Joystiq, will be liveblogging the presentation. We'll also have our usual quips and tips afterward, as well.

Yesterday's eBay treasure-find got us thinking. We tend to idolize certain figures in the gaming world, even if they happen to just be suave business men. And don't get us wrong, Iwata-san is the very definition of a ladies' man. But in all the realm of gaming, from players to publishers, who would you want to sign your DS?

Bonus points if you don't pick Miyamoto, but, uh, we totally pick Miyamoto. I mean, he deserves it, right? And he's got such a cool signature.

Over at Joystiq, they snapped the above picture outside of the Phil Harrison (he's some Sony guy or something) keynote speech today. It's funny on multiple levels; not only was Reggie at the PS3 keynote (he must own one of them suckers), but his limo driver looks like he spent the majority of his time outside the keynote pounding beers.

Maybe he doubles as Reggie's body guard? He looks like a grizzled war vet ...

Don't lie, faithful readers. Each and every one of you, upon reading this article, indulged in at least four seconds of consideration on applying for the position of Reggie Fils-Aime's personal assistant. The list of technical requirements was steep, but when you consider the amount of people willing to take this job is approximately 6.5 billion, there are certainly a few out there who fit the bill.

Reggie personally kicks all those asses that are so frequently mentioned. But those names he's taken? He merely dictates them to that special person, whose job it is to transcribe the taken names for future reference. Truly, a job of monumental importance.

A little known fact, friends, is that Reggie has a direct impact on the Japanese hardware sales numbers every week. Here is an example conversation, heard behind the closed doors of his secret penthouse office...

Reggie Fils-Aime: We need to come up with some interesting numbers this week.

Assistant: Sir, they have the actual data available in Japan, if we just--

Assistant: If you wan--

Reggie then rips out the assistant's spine in retribution.

Wii takes its cue from the DS

In a recent Q&A with GamePro, Reggie Fils-Aime pointed to the DS, and not the GameCube, as the real inspiration as most of Nintendo's strategy with the Wii. That doesn't mean that multicolored units are around the corner (unfortunately), but it does mean that we can expect a lot of aggressive marketing to people that aren't usually considered gamers. Considering the incredible sales numbers, that's certainly worked well for the DS! As the core group responsible for the DS and its success, it's like that others will, in the future, try to mimic that. So, DS gamers -- do you think that what's working for Nintendo may work for others in the future?

Satoru Iwata (dressed as a vampire): DS Lite perform amazing feat in global market! More hundred thousand units in time of week! Much party enjoyment, everyone, so scary is coming!

Iwata: They are doing the fun, yes?

Shigeru Miyamoto (dressed as a dinette set): Ah! You see, this is the inspiration for my next masterpiece. Get ready for the next generation of fun!

Reggie Fils-Aime: What do you mean?

George: It's Halloween. You need a costume. You're just dressed normally.

Reggie: This is my costume.

Reggie: Now get me a sandwich.

Reggie for president: changes on the way?

Yesterday, Nintendo revealed that several of their key personnel had been granted prestigious promotions, the most grand one being that of Reggie Fils-Aime being shifted to the role of President (we have to write it like that at least once) of Nintendo of America. Sure, Tatsumi Kimishima (now CEO) and Mike Fukuda (now executive vice president of business development) play important roles in the magical inner workings of Nintendo, but we haven't come to associate them with name acquisitions and posterior ass-aults quite like we have with Reggie.

So, Reggie's the president. What does that mean for you, me and the creepy, unshaven guy reading over your shoulder? Well, apart from an increased desire to come up with a new and entirely daft nickname (The Preggie), not much. With the Wii's marketing plans already in full swing and a strong games lineup ready to be released and marketed to death, it's unlikely that a dramatic change in Nintendo's focus or image will manifest within the immediate future.

The long run, however, may reveal some changes. When Reggie first took the stage back at E3 2003, many were surprised by his determination and attitude, qualities that didn't quite seem to fit in with Nintendo's supposed "family" image. The man can spin things at uncanny speeds, that's for sure, but there does seem to be conviction and passion beneath all the marketing hooplah. In his new position, Reggie may be able to influence Nintendo of America even more forcefully than before, taking command of its direction as opposed to just explaining why they've chosen that particular path.

I'd like to know what you (creepy, unshaven guy included) think about all this. "Big deal!" or big deal? 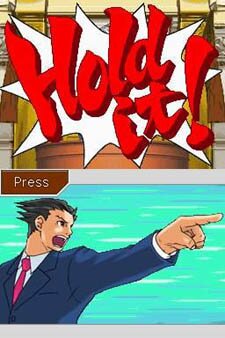 In Engadget's most excellent interview with Reggie Fils-Aime, Nintendo's name gathering, posterior assaulting VP of Sales and Marketing, it was revealed that we shouldn't be completely caught by surprise should Nintendo decide to release yet another DS redesign. If you count the model originally unveiled at E3 2004, this future model would represent a 3rd redesign--not that it would stop us from buying it, apparently.

"Look at how many times we’ve improved on the Game Boy Advance in terms of the look, the feel, screen changes, and everything else. We believe that type of constant innovation is critical to driving this industry [my emphasis], and certainly if you look at the world wide sales of Game Boy Advance, I don’t think anyone would disagree."

HOLD IT! Your Honor, there is clearly a contradiction in this story! (...At least I hope so! The whole controversial case is riding on this...) Are we to believe that the act of repackaging and updating the aesthetic qualities of a platform, however attractive, is now considered to be a form of innovation? In the past, the witness has attacked the competition on the same grounds, complaining that they were simply releasing shinier and better versions of previously popular products. The implication was that their approach was the wrong kind of "innovation"! I suggest the witness revise his testimony! (Uh oh, Edgeworth has his serious / constipated face on. I hope he realizes I'm only referring to the actual hardware, not the games!)

Food for thought, or lousy leftovers? Be sure to follow the link for the entire interview.