With the recent hubbub over Apple's iPhone and iPod Touch, many are wondering if it will threaten the market dominance that Nintendo enjoys with their DS handheld. Even though Forbes thinks Apple has a chance at dethroning the DS, we're realists and know that just isn't possible. But, then the price point for iPhone games was revealed and we got a tad bit worried.

Sure, games sell the system, but the titles available on the iPhone and iPod Touch will go for 17-18 Euros (which comes to about $25-$28, less than Nintendo's first-party titles), according to LemonQuest CEO Ignacio Cavero. It's not much, but it's something, and definitely a lot more noticeable when compared to Square Enix games, which often debut at a $34.99 price point. But, we could also see even cheaper stuff, because Apple is leaving the final pricing up to the publishers.

What do you all think? Will price play a big role here? Or, are you waiting on some games before you jump to any conclusions?

To say that the iPhone and iPod Touch could kill the DS is a bit alarmist, but that doesn't mean they won't offer Nintendo's handheld some healthy competition. Come Monday, the App Store will launch on iPhones and iPod Touches (via a firmware update), allowing users to download games and applications straight onto their devices.

Aside from the ease of getting games, the iPhone and iPod Touch utilize a stylus touchscreen play, like the Nintendo DS. Trying to one-up Nintendo, Apple even added motion-sensitivity into the two machines.

We're interested to see how the App store will affect the handheld gaming market, but is the DS in danger of dying off now? Not likely.

iPod cozies from the Mushroom Kingdom

Is this not the cutest frickin' iPod case you've ever seen? Martha Wozniak knits not only these Luigi-themed cozies, but Mario and Princess Peach pouches as well. If only they could fit a Nintendo DS, that would be perfect!

We're sure that many of you would gladly pay a king's ransom to secure one of these -- they look like great Christmas gifts -- but they're available on her Etsy shop for only six dollars each! Button your overalls and jump past the post break for images of the Mario and Princess Peach iPod cozies.

For years, we've been crying bloody tears over the lack of availability of game soundtracks in the US. With the rise of music download services, that situation has changed. First we had some Final Fantasy soundtracks on iTunes, then the Mother 3 OST, and now the best news of all: Konami has made a deal with Sony BMG to make their entire music catalog available on download services.

Naturally, we'll be loading up with Castlevania music, but Konami has a very large collection of notable game soundtracks that at least deserve a previewing: the Metal Gear Solid series, Contra, Goemon/Mystical Ninja, and Akira Yamaoka's brilliant Silent Hill work. We don't know when Konami will start releasing music on iTunes/Rhapsody/your favorite download service, and we don't know what the order of releases will be. One thing we can confirm: this is hot.

[Via Dot Matrix with Stereo Sound]

First the DS gets turned into an iPod, now flickr user sirljohns has managed to transform the original Game Boy into an iPod, effectionately calling it the iBoy. The folks responsible for the DS mod provided a video, something which sirljohns did not do, so we cannot comment on which has the better functionality. However, the geek-cred that comes from lugging the OG handheld itself around is something that one cannot easily ignore.

Anyone interested in doing this to their old Game Boy?

We're constantly impressed by what lengths other Nintendo obsessed individuals will go to just to include Nintendo into every facet of their life. From hacking a SNES to the long-dead Power Glove, we've seen some stuff that is just utterly beyond our skills. Now iPods are being crammed into NES controllers for some Doom action!

If you've seen a cool Nintendo-based mod, or have done one yourself, be sure to let us know!

While the usefulness of such a homebrew application is definitely arguable, what is not arguable is how well it mimics the iPod interface and the aesthetical appeal of said interface. Personally, we would like to give this a try, but with memory issues and more viable solutions for portable music, we don't see ourselves utilizing this application in the long run.

DS wi-fi and Apple Mac can be friends too

The iPod craze is still at large and we have seen the Apple logo spread to some pretty unusual places. If you are one of the brave souls who tore yourself away from your PC and ventured into the world of Mac, but still want to play your pals in some online MP:H or Mario Kart, PocketGamer can help.

They have posted an easy to follow process in six simple steps that will help you plug back into gaming. This way, you won't have to hide your embarrassed face after finding out your Nintendo wi-fi connector doesn't work with OSX.

iPod games "no substitute" for DS

We could have told you that, Macworld! Looks like the handheld powerhouse of the DS (and some other system) is tempting even Apple to get into the game. As part of Apple's huge Showtime event, they announced not only a new video iPod, but games that can be purchased from iTunes for it as well, priced at $4.99. "Apple's been hard at work on new games for the iPod -- while it still may not be a substitute for a Nintendo DS or Sony PSP, the new iPod can play versions of popular casual games including Bejeweled, Mahjong, mini-golf, Pac-Man, Tetris, Cubis, Texas Hold 'Em, Vortex and Zuma ...."

For DS owners, this can't really compare. Those of us who enjoy the occasional casual game already have a few on the system, and the more tech-savvy DS owners can cook up just about anything they want with their homebrew powers. It's hard to gauge exactly which market Apple is trying to snag here. We can only speculate that Apple is going to try to hit mobile gaming where it lives, by offering easy downloads and a better interface. We so often hit the five instead of the six, after all. And who knows -- for those folks out there who use their PSPs primarily for media and only the occasional game, this may tempt them out of the Sony camp.

So who's planning on snagging Bejeweled 2 or Pac-Man just to see how it plays? We're pretty sure Apple can't tempt us away from our Tetris, but some of the others may be worth a go. 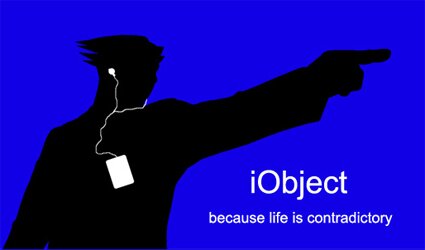 A little-known fact about DS Fanboy is that no matter how verbose, articulate, witty or insightful you may be, you are completely ineligible for employment here until you've played, beaten, and critically praised Phoenix Wright: Attorney at Law. So imagine, if you will, our glee at the news of yet another installment of Gyakutan Saiban (Our lovable little Phoenix's Japanese moniker) slated for release on the DS in Japan.

The first three Gyakutan Saiban games had a continuous, complex plotline weaving in and out of almost every case in the trilogy. It was brought to a satisfying close at the end of the third installment, and so this fourth iteration actually stars one Housuke Odoroki, as opposed to Phoenix himself. This will be the first of the series specifically designed from the ground up for the DS (the three previous installments were all originally GBA titles), so some intriguing new gameplay facets are sure to make themselves known. Other than that, there isn't much information available, but we have no doubt as to the quality this game will surely bring to the table.

The original Phoenix Wright is in the midst of a partial "rebirth" at the moment, with a third shipment of the game being shipped to stores quite randomly throughout the country. The upcoming Phoenix Wright: Justice for All game (actually Gyakutan Saiban 2) is scheduled for release early next year.

Time Magazine recently gave the DS Lite its oh-so-coveted "Gadget of the Week" award, lauding the iPod-like design and Touch Generations series of games. Time Magazine seems to be the premier mainstream-gaming press outlet of late, also lauding the Wii in recent weeks as well.

It's a bit silly, reading an article like this as a well-informed, knowledgable gamer, but pieces like this do wonders for a system's appeal outside of the established market. Before you know it, you might just be getting your backside handed to you by sweet ol' grandma in a game of Metroid Prime: Hunters.

Capcom of Japan sends news that the soundtracks to all of the Gyakuten Saiban (Phoenix Wright to you and me) games will be hitting the Japanese iTunes store, each song fetching a price to the tune of about $1.25. Complete albums will go for between $8 and $20. (Converted to American currency for your convenience.)

The music in Phoenix Wright: Ace Attorney certainly spurred you on to point out that final contradiction just as the shady witness was cracking, but I don't think it would work as well when detached from the game. I think prolonged exposure to it in its seperate form is likely to result in feelings of elevator claustrophobia, along with a strong desire to play the full game.

Still, I'd like to see Capcom's musical endeavor succeed, if only for the reason that it might prompt them to throw some more Mega Man remix soundtracks on Apple's download service. I could listen to the Mega Man 2 title screen music or the theme from Ring Man's stage all day. Any other great Capcom tunes you'd like to have on your MP3 player?

[Thanks mandarin! Strange image from Siliconera.]