Go back to school with your Mac, iPhone and TUAW
GameDaily
Add to: My AOL, MyYahoo, Google, Bloglines

So the DS has been on the receiving end of some great games from Nintendo's most popular franchises. We had the excellent Phantom Hourglass, the million-billion-selling New Super Mario Bros. and some solid installments in the Animal Crossing and StarFox franchises. But what's next?

Which one of Nintendo's franchises do you want to see hit the DS next? A new Punch-Out!!! game? Or what about the next installment in the Pikmin franchise? What would you like to see from Nintendo?

Brain Training rocked the UK in '07

A list of the top fifty best-selling games in the UK last year has surfaced, and the DS snagged six of the spots, though you may be somewhat surprised by what made it. Of course, considering that there are a lot more regular folks than there are "hardcore gamers" (and even the hardest of the hard like a little break now and again), you may not be that surprised after all.

The original brain game, Dr. Kawashima's Brain Training, took the number two spot as the second best-selling title overall, and the sequel, More Brain Training, slid in at number five. Considering that Big Brain Academy turned up at number 37 (along with its console cousin at number 24), there must be a lot of healthy and exercised brains trundling around Dear Old Blighty these days. The other games that turned up were New Super Mario Bros., at number 13, Cooking Mama just above it in twelfth place, and way down near the bottom, Pokémon Diamond turned up at number 44. Perhaps our friends in the UK have already caught them all.

For a lot of us, this updated list of current and forthcoming "primary" Nintendo releases doesn't offer much, but for European gamers, there's a lot to speculate on. We keep seeing this DS Novel pop up, but what exactly is it? When it's shown up before on lists, there was also a "temporary title" tag attached, but no longer, though other titles on the list are tagged as such. Is it settled? Is it just the e-book reader? Literature-themed nongame? Sounds like it might be worth importing for litgeeks in the rest of the world. If you know something we poor Americans don't, please clue us in!

In other news, Nintendogs continues to lead the pack among DS titles in sales, with Pokémon and New Super Mario Bros. lagging a little behind. Unsurprisingly, the phenomenal Brain Age duo keeps churning out the dollars as well.

To see the full list of releases, check after the jump.

NeoGAFfer Stumpokapow compiled this chart of Japanese Mario sales throughout the series, and two things are immediately obvious from looking at it:
We knew that NSMB was riding the combined influence of Nintendo nostalgia and Being On The Nintendo DS into sales Valhalla, but we didn't realize just how successful it was. If Nintendo ever gets enough DS Lites into Japanese stores, we can almost guarantee that two-million copy gap between it and the original Super Mario Bros. will disappear.

In other good news (in one blogger's opinion and pretty much no one else's), Super Mario 64 is near the bottom of the list, providing evidence that 3D Mario was a failed experiment. This in no way means that Super Mario RPG's position on the list is indicative of the quality of that game. That's, uh, completely different. Check after the break to see the full chart and to register your disgust about our treatment of Mario 64.

The perils of bathroom gaming

Bathroom gaming has been a popular pastime for as long as handheld consoles have been around. We like to imagine that even before our age of technology, kids spent their lavatory leisure time playing ball-in-a-cup or some other antiquated equivalent. That's how far back this honorable tradition goes.

As Infendo Radio host Scott Johnson can tell you, however, bathroom gaming does not come without its hazards. It's easy for things to go wrong while multi-tasking, but when you're sitting on the toilet is one of the worst times that can happen. Johnson has an entertaining, animated short describing his woeful experience. The Flash cartoon also serves as a warning to all you extreme bathroom gamers out there: playing New Super Mario Bros. in the work washroom might be fun, but if you aren't careful, it can quickly turn into a commode catastrophe.

Nintendo of Korea has put out a 30-second commercial to accompany its recent release of New Super Mario Bros. The advertisement continues the Korean branch's trend of using a popular face to push their products, enlisting the help of an actress famous for both her TV and film roles.

The commercial is set up much like its Italian and Japanese counterparts, introducing the scene with a shot of an enthusiastic girl playing with a DS Lite in her bedroom. The ad alternates between clips of gameplay and close-ups of Lee's reactions. An extended, minute-long video without the gameplay clips is also available.

Over at 4 Color Rebellion, writer (and Seoul resident) N Rumas tells us of a nation's ability to love Nintendo again. In riding the train, he reports of daily sightings where people are enjoying the DS and Brain Age, as well as seeing the handheld plentifully stocked at local retail outlets. He even reports of a friend, who owns a shop, enjoying a boost in business.

Now, with the release of New Super Mario Bros. this week, sales in the region for Nintendo should skyrocket that much further. With the universal appeal and popularity of Nintendo's plumber mascot, the game should sell very strongly upon release.

As gamers, we are members of a very unique culture that permeates every fiber of our being. Odd gaming quotes and an insatiable desire to explode all barrels in sight are just a few of the things that come to mind when we think of gamers (the rest are just as nice, we assure you), and upon seeing this Rubix Cube, which is affixed with various pictures of Mario and Luigi from the game New Super Mario Bros., we knew that we had to have it. Do you share our desire?

Where can you find Hannah Montana hanging out with FFIII? No, not on a shelf at your local GameStop -- in Next Generation's list of the top 100 best-selling games in North America in 2006. But you get more than just a regular ol' list; they also broke the games down by average critical rating, and it's pretty interesting to compare sales with review ratings. More signs that the review system could use an overhaul? Or just an indication that critics and gamers often look for different things?

Some interesting things we noticed while perusing the list:

Cute game cases for the Mario and Pokemon fan

Siliconera has documented the above game cases, which are distributed in Japan by company Takara Tomy, available for the small price of 200 yen (about $1.61 USD) each. The only snag is that you do not get to pick which one you get, instead offering your money int he hopes that you'll randomly get any case other than the bricks.

We've included the Pokemon cases after the post break, which will become available next month.

Man, Japan gets all the best stuff! The above are two different board games (Crystal Attack and The Tower variety) based on the smash hit New Super Mario Bros. and, while they do not look entirely like the traditional board game, they certainly bring the kid in us out. With moving parts and warp pipes, we would love to import ourselves both of these, but in all honesty the price is a bit too steep.

The games are set for a March release in Japan and will cost importers $45 USD for the Crystal Attack version and $35 USD for The Tower version. The site makes no mention of shipping and handling costs, but we're sure it has to be at least $10 USD a piece.

Anyone going to pre-order this?

It's always nice to be reminded that it's not just about us. Y'know, the hardcore devotees the folks who cackle over zany niche titles, when we're not busy whipping it good in something a little more mainstream. Awesome as we are, we're not the only ones who drive the DS market ... and the list of the bestselling games of 2006 (in the U.S.) serves as a great little reminder. The DS grabbed two of this year's top spots with New Super Mario Bros. and Brain Age, which took 2nd and 10th, respectively. Numero dos behind Madden '07 is a pretty big deal, and surely not all of the people who bought New Super Mario Bros. would consider themselves Nintendo fanfolk, and that's almost certainly true of Brain Age, as well. The DS may not be recognized as the top system in the U.S., but we're still in your lists, stealin' your slots. And, of course, that money.

We have shown you all the stylus options and let you ponder which one fits you best as a gamer. Now, we have to tell you that you were wrong in your choice and you have to go with these! Not really, but they are fun to look at plus you get a pair with Mario and his trusty sidekick and brother, Luigi.

These are only 9 bucks and would come in handy if you lost your current stylus like the bad gamer you are.

Thinking about it, we would bet dollars to donuts that this guy already has an entire case.

It doesn't sound like a whole lot when you already have a black DS and both the games but to a harcore collector this is a gold mine. 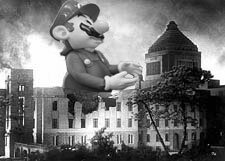 As if those weekly hardware charts weren't enough to convince you, Next Generation has put up a report that once again underlines just how well the DS Lite is performing in Japan. The words "ridiculous", "ludicrous" and "criminal" certainly spring to mind when noting that the Lite sold 575,000 units last month, making for a grand total of 2.6 million thus far.

New Super Mario Bros. has been flying off the shelves with equal aplomb, right into the hands of 1.8 million nostalgia-craving gamers. It has become one of eight DS games to break through the meticulously guarded million sold barrier. As part of those who initially thought the DS to be a silly device that would be beaten to a pulp in the handheld gaming ghetto, we've been proven wrong again and again. And again.

Let's be honest now. Did you expect this to happen back in 2004?